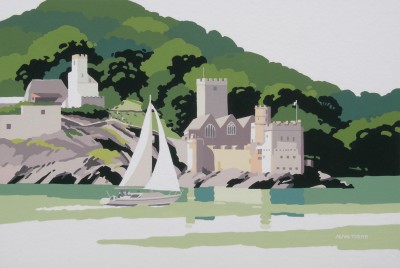 Alan Tyers was born in Coventry in 1944. He won a full time place in the School of Art at the age 13. Tyers trained in fine art, with particular emphasis on impressionism. He then left after five years to pursue a very different artistic direction in advertising.

Although Alan Tyers career in advertising and design was extremely successful, as a Creative Director and partner in his own company and as a creative consultant, he has always continued to paint.

Alan Tyers has had a number of one man art shows and exhibits regularly at various art venues, including the Laing Open in Birmingham, the Pall Mall Art Galleries in London and of course Red Rag Gallery. Now a full time artist, Alan's interest in steam railways combined with his passion for painting has influenced his distinctive art style based on '1930's British railway poster art'. Tyers paintings have a simplified realism and romantic decorative quality, depicting his favourite subjects of the English countryside, particularly Warwickshire and the Cotswolds and the Cornish coast.

Alan Tyers paintings are in a number of private and business art collections. Each painting at Red Rag Gallery is sourced from the Alan Tyers artist studio and like all Red Rag British Modern art it can be shipped worldwide.