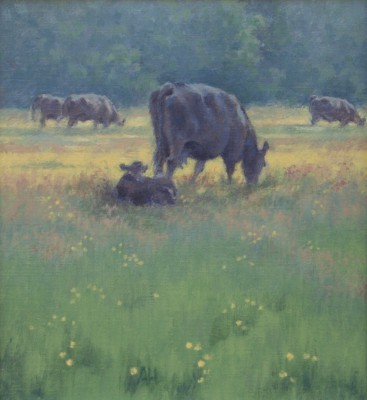 British artist Ann Heat was born born in Esher, Surrey in 1945. She studied Technical Illustration at Kingston School of Art and the London College of Printing. Ann also studied art at the Kathleen Browne School of Painting and her painting has very much been influenced by the late Ronald Benham NEAC.

Ann Heat initially worked for IPC in the Art Department of the 'Farmers Weekly'. Eventually she left to focus on producing her own paintings and helping out on the family farm. She says her first love is still-life with cracked cups and bits of junk being her most prized possessions, but having the cows outside her window, she cannot resist the shapes they form through the day, as the light changes. Ann is also interested in figures within interiors.

Ann Heat works primarily using oil paint, either on a gesso panel or on linen over hardboard. Once a painting is started Ann uses oil paint thinly in built up layers. The under-painting shows through in places which with the top colour and the one underneath is creates harmonies. She uses complementary colours such as a rusty hue under green always in a muted appealing palette.

Ann Heat creates paintings which are quintessentially English both in subject and style. Her wonderful pastoral scenes are highly sought after as are her art works of still life subjects.

In addition to Red Rag Gallery Ann Heat has exhibited at a number of other leading British art galleries including the Royal Academy, Royal Society of Portrait Painters, New English Art Club and the Royal Institute of Oil Painters. In 2011 Ann Heat won the "De Laszlo Medal" at the Royal Society of British Artists.