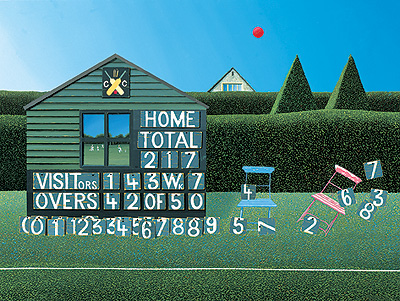 Michael Kidd was born in 1937. He studied at Wimbledon School of Art where he gained a scholarship to the Royal College of Art. On leaving the Royal College he worked as an art director in some of London's leading advertising agencies.

In 1966 Michael Kidd moved to New York to work as a creative director for a London Agencies' New York office. Following his return to the UK he began directing T.V. and Cinema commercials in Europe, America and the UK and undertaking work for British Airways, Coca Cola, Lloyds and Barclays Bank, Ford Motor Company and many more.

From 1981 Michael began painting between shoots, slowly this became more important to him, and friends began to buy his paintings. In 1997 his paintings were noticed by Stanley Harris of the Rona Gallery in Mayfair, he invited Michael to produce a one-man show with a garden theme.

Following the success of Michael's first show he gave up directing to become a full-time painter.

All of Michael Kidd's art work shows a strong imaginative streak, quirky at times, surreal at others. He tends to work on themes - gardens, chateaux, coastal, cities, whatever subject holds his interest. All paintings are acrylic on board.

Michael Kidd says he tends to 'think in terms of numbers'. He is facinated by 'patterns and mathematics, the poetry of the indecipherable'. Kidd's paintings and prints show his characteristic pleasure with what he calls 'playing with different perpectives - giving the illusion of the reality, and keeping it simple'.