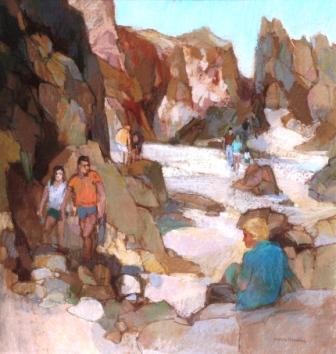 Moira Huntly is a British artist of internationally standing.

Born in the Scottish town of Motherwell, Moira Huntly studied in London at Harrow School of Art and Hornsey College of Art. She received a classical British art education based on observation and drawing. Moira holds a London University degree in Art teaching.

Moira Huntly is the recipient of numerous and prestigious art awards. Huntly is also the author of several art books on drawing and painting.

In 2004 Moira Huntly was appointed the first ever woman President of the Pastel Society. She is a member of: the Royal West of England Academy; the Royal Institute of Painters in Watercolour; and a Member of the Royal Society of Marine Artists.

Moira Huntly contemporary paintings are in acrylic, pastel, oils and watercolours. Her subjects are diverse but Huntly's love of Marine and Architecturial subjects has been a recurring theme to her paintings.

Moira Huntly is also the author of several books on drawing and painting.

At Red Rag Modern British Art Gallery we are particularly pleased to show Moira Huntly contemporary paintings. Moira has a long association with the art gallery. For many years she and leading British artist John Blockley used to paint in our historic Cotswold art gallery building. Moira still lives close-by on the borders of Gloucestershire and Worcestershire.