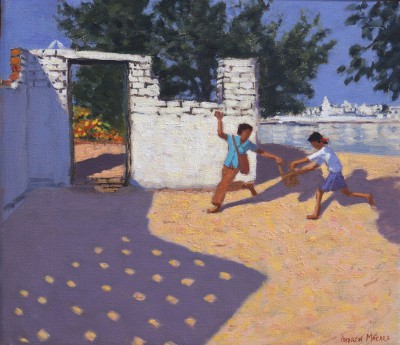 Andrew Macara was born in Derbyshire in 1944. Although he studied contemporary modern British Art for a short period with Leonard Fuller at the St Ives School of Painting, he considers himself a self-taught artist.

Today Andrew Macara has one of the most distinctive styles of present day contemporary British Artists and has enjoyed considerable success. He is a member of the prestigious New English Art Club having been elected in 1984

Talking about Macara's paintings, Professor Ken Howard RA says: 'I have known and admired his work for many years. Although he has painted many different subjects over the years, the subject is always incidental to light. His paintings glow and as with all the best paintings of light they never describe, they are always an equivalent for light - the light comes from the canvas. As well as being full of light, his paintings are also full of life. Whether it be life on the beach, in the playground or in the zoo, Andrew simplifies but always captures the essence of his subject. His work is full of movement, atmosphere and space and his paintings are deservedly popular for he always touches on the everyday joy of life.'

Andrew Macara travels extensively gathering images for paintings from around the world, but his native Derbyshire continues to feature in many paintings - particularly the more recent Winter scenes. Other subjects with strong demand are Andrew's British seaside paintings.

Andrew Macara is now established as a very collectible contemporary figurative artist. His contemporary paintings are always in demand and much sought after and, over the years, his paintings have proved to be a good British Art Investment.