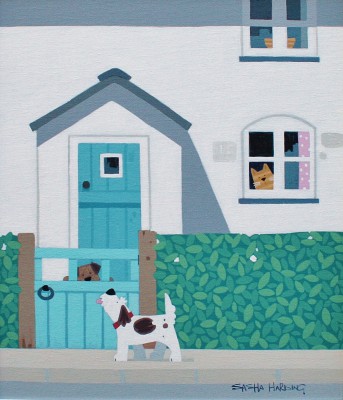 Sasha Harding was born in Bath in 1973. She studied at Marlborough College, Shelley Park in Boscombe and Falmouth School of Art where she graduated with a degree in Fine Art.

Although born in Bath, Sasha Harding grew up by the sea on the south coast in Dorset. She was encouraged to paint from an early age and had her first art exhibition at the age of fourteen with an older sister in the sitting room at home. Her interest in art was stimulated, both by her surroundings and a tradition of art and music in the family. Two of Sasha's grandparents were artists and Jeka Kemp, a well-known post impressionist painter, was a great aunt whose sketch books the children were allowed to play with when they were young.

Sasha Harding's contemporary paintings are inspired by her happy childhood spent on the coast of Dorset. She continues to live close to the coast and finds on going inspiration from the sea shore and local life. Sasha's paintings contain limited colours - she uses three colours and white. This allows Sasha to concentrate on her interest in form which is carried through in her depiction of coastal scenes. In these she explores the gentle tones of a beach seen under a cloudy sky, or in the reflective languor of a summer day. Her observations become more sharply drawn in bright sunlight, with clear colours and crisp accents. Harding's sense of the absurd sparkles irrepressibly through her paintings, but the lasting impression is one of great affection for her subject.

Sasha Harding lists many influences on her art works including including the Scottish colourists, Newlyn artists and Stanhope Forbes and Elizabeth Forbes.

Sasha Harding's paintings are available from the Red Rag Gallery in Bath. She has also shown at a number of other leading British art galleries. Her paintings are now in numerous art collections throughout the world.