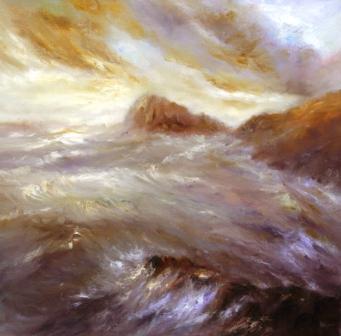 Since graduating from Sunderland University Kate Van Suddese has exhibited her paintings in a wide range of contemporary art galleries throughout the North of England and in London and Edinburgh.

Kate's striking contemporary paintings show a debt to Turner and the impressionists. 'I have been influenced throughout my painting career to a great extent by the wonderful light and drama in Turner's paintings and by the use of light and freedom of brushwork epitomised by The Impressionists. I admire the beauty and iridescence captured by the Pre'Raphaelites and the drama of Expressionism. In all, the interest in beauty, light and other worldliness, where the mundane becomes extraordinary and the familiar becomes surreal.'

Kate Van Suddese has been working on a series of paintings called 'Sea Senses' for a number of years and the sea remains an ever fascinating subject. The oils range in size from large scale to very small scale pieces both equally powerful. She describes the sea is a wonderful catalyst for every emotion experienced. Van Suddese is continually trying to capture the drama and light embodied in the physical presence of this immense body of water and its relationship to the land and sky.

' I strive to capture the mystical sense between the sea, land and observer, the ever changing swirls of moods and response and the contrast of finite and infinite. Beauty, light, power and drama is everything, to transform the ordinary into something magical and extraordinary is all.'