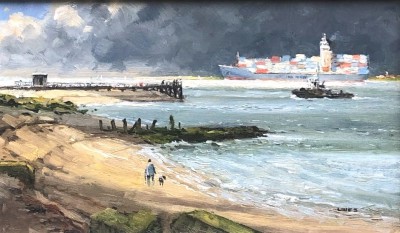 John Lines was born in 1938 in Rugby Warwickshire. He studied art in Warwickshire at Rugby Polytechnic from 1959 and then at York School of Art from 1961 to 1962.

Lines has been exhibiting his contemporary paintings since leaving art school. But initially his time was shared between art activities and working in Industry.

John Lines paintings are distinctive and beautifully painted. His style is very much Modern British and Lines prefers painting in oil and watercolours. As an artist his stated aim is to 'Simply paint through honest eyes'. Ample evidence of this approach can be seen in his paintings of British Urban scenes and English Landscapes subjects.

John Lines has many notable art successes including : First Prize - Museum of Modern Art, Wales; First Prize Royal Society of Marine Artists; and Awards at the RSBA. Lines has also featured as Master Class Painter in International Artist magazine. His work is always in demand and increasingly collectable.