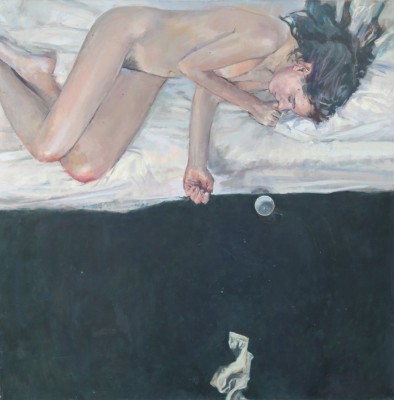 David Cobley was born in Northampton, England in 1954. After dropping out of art school at the age of eighteen, Cobley traveled around Europe and spent almost ten years studying and working in Japan before returning to England in 1985 as an illustrator and contemporary artist.

David Cobley has been drawing and painting people since childhood. This fascination with the human form has been a constant passion to Cobley in his paintings. He says: "My paintings are almost entirely about the figure - the human form as it is illuminated, as well as concealed, by the light that falls upon it or around it. Using the effects of light, painting can create the illusion of solid form in space; while at the same time blur distinctions between the two. The medium of paint also enables another kind of illusion to come into play - that of the figure emerging from, yet dissolving into, the pigment which gives it life. In the half-light between highlight and shadow, painting offers the tantalising possibility of drama, intrigue and magic."

Cobley is now well established as a superb portrait artist. His serene and reflective paintings of the female nudes demonstrate outstanding mastery of paint, tone and composition. But David is equally talented as a successful artist of Still Life and Landscape paintings.

Cobley was elected a member of: Royal Society of Portrait Painters in 1997; New English Art Club in 2000; and Royal West of England Academy in 2001.