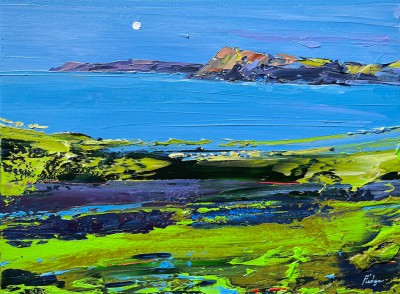 Tim Fudge was born in Scotland but now living in Wales and is very much an artist with the artistic heritage of both nations coursing through his veins. The vivid and vibrant palette of the Colourists combined with the sculpted knifework of the likes of Kyffin Williams create bold dramatic works that announce their presence somewhat unapologetically. In fact, boldness is quite a feature of Tim’s work; he is unafraid of the possibility of ruining a piece, being firm in his belief that an artist, especially an expressive artist, must be prepared to experiment and take risks. And he is strict on quality control - if the finished work does not meet with his approval, it will never leave the studio.

His main source of inspiration is the UK coastline and, in particular, the western shores - from Cornwall through Wales to Scotland and Ireland. He is struck by the sense of history and timelessness of the rocky formations, where the topography has remained unchanged for thousands of years. He prefers to paint on crisp, clear days, especially after rain, when the intensity of light allows him to indulge his love of colour. “I’m fired by that contrast of emeralds and Prussian blues of the sea against the cadmium yellows and oranges of lichen, or the intense reds of rowan berries against the blue of the sky.”