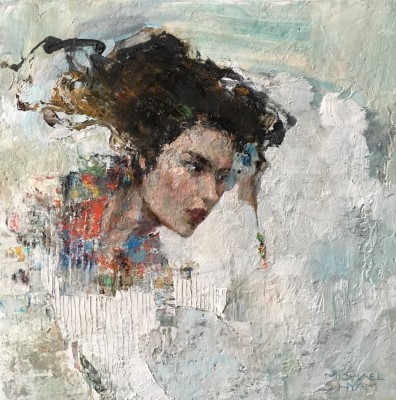 Michael Hyam was born in London in 1958. His formal art training was undertaken at Newcastle Polytechnic.

Portraits and figures tend to dominate Michael's art work but he is equally enthusiastic towards his paintings of landscapes.His figure works embraces a traditional approach of portraiture often with an intriguing element of Mannerism. As such figures can display a graceful appearance with elongated and stylised features.

Commenting about the inspiration for his paintings Michael says: 'I am drawn to and inspired by many things. Just talking to people sometimes. Sometimes music can do it. I've played the guitar since I was 14 years old and that can have an effect too.'

Michael Hyam has exhibited widely in the UK and Internationally. These include: Royal Society of Portrait Painters; Royal Watercolour Society; Summer Exhibition at the Royal Academy and the Royal Institute of Painters in Watercolours. In 1992 he won the Daler-Rowney Award for Outstanding Work and in 1993 was elected an associate member of the Royal Society of British Artists. Michael has also undertaken a number of high profile commissions including portraits of Sir Frank Rogers, Peter Ridell (of The Times) and Sir Phillip Naylor-Leyland.His work is held in many private and public art collections.

In addition to Red Rag Gallery Michael Hyam has also exhibited at other leading British Art Galleries. Each painting at Red Rag is sourced from the Michael Hyam artist studio and like all Red Rag British art and Contemporary art it can be shipped worldwide.