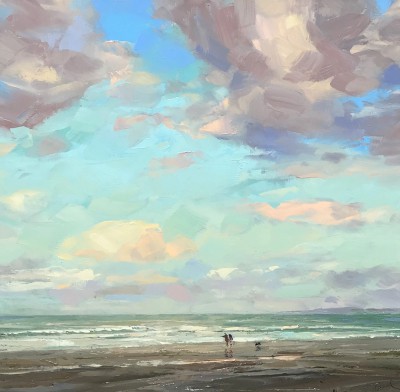 Harry Brioche was born in the Seychelles in 1965 of Creole and American parentage. He had a wonderful childhood growing up on the island of Mahe. Following the Coup d’etat of 1977, Harry finally resettled in Manchester.

Harry considers himself a self-taught artist despite attending Maidstone College of Art. Following an ultimatum by his college lecturers to conform to the institution’s style and methods of painting or leave, he ultimately decided to go it alone. Harry went on to carve out a highly successful career as an illustrator and graphic designer, working with world renowned brands including Dr Martens, Coca Cola and BAE Systems.

From an early age Harry Brioche was captivated by the drama and beauty of the British sky and landscape. The ever-changing weather patterns and atmospheric conditions, were in sharp contrast to that of the tropical idyll of his youth in the Seychelles. This inspiration at such an early age was, and continues to be, ever-present in his painting.

Talking about his art work Harry states; “The landscape is almost incidental; my main objectives are to try and capture the atmosphere and 'spirit' of a place. Ultimately it is the mood and light within the painting which becomes the central theme. As an artist I paint subjects that inspire me and bring me and, hopefully, others pleasure.”

Artist Harry Brioche is one of a growing number or artists whose modern art works feature at the Red Rag Gallery in Bath, which also offers an extensive choice of modern art, contemporary sculptures and collectable art prints from other present-day artists. Should you wish to buy or require further information about modern art from Harry Brioche, please email Red Rag Art Gallery or phone us on the number below.