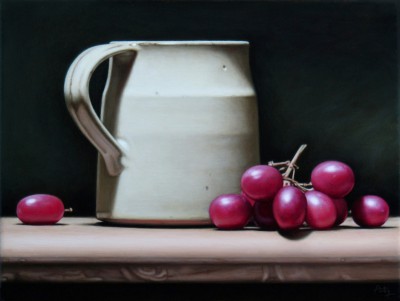 Born in Essex, Anthony Ellis began his artistic training at Seevic College in Essex where he worked under the tutelage of Steven Dowson. After graduating from the school in 2006, Anthony applied, and was accepted, to study at the prestigious Angel Academy of Art in Florence, Italy.

At the academy Anthony studied under the well-known painters Michael John Angel (student of acclaimed artist Pietro Annigoni) and Jered Woznicki. Whilst studying at the Academy, Anthony Ellis worked extensively from live models to produce figural and portrait work alongside painting Still Life.

In 2011, he was invited to become a member of the Guild of Norfolk Artists and has exhibited his portrait and still life work in the successful annual Guild Exhibition.

In 2012, his portrait work was accepted for exhibition at the Royal Society of Portrait Painters Exhibition at the Mall Galleries in London. Notable portrait commissions include Kay Twitchen, Chairman of Essex Council (2013) and a former High Sheriff of Essex (2012), as well as several prominent businesspeople. His work can be found in public and private collections throughout the country and he continues to complete both portrait and still life work.