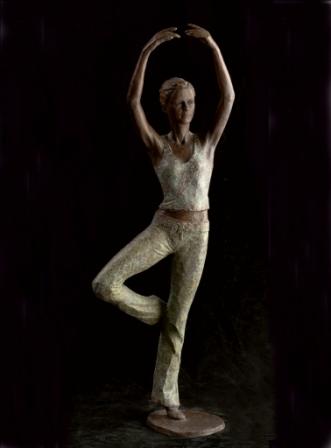 British sculptor Vivien Mallock was born in Hitchin in 1945. Coming from a military family, Vivien's childhood education was disrupted as her family regularly relocated to the outposts of the rapidly shrinking British Empire.

Vivien Mallock worked as a disc jockey and waitress and subsequently married into the Army. She took up sculpture after being requested to assist in producing dummies for an exhibition to mark the 50th anniversary of the Battle of Britain at the Museum of Army Flying at Middle Wallop. Mallock sculpted portraits of individual aircrew who flew. The sculptures have since become a unique artist feature of the Museum.

Vivien Mallock's sculpture is primarily in bronze. It includes a diverse collection of sculptures from portraiture and monuments to small figurative sculptures of human and wildlife subjects. Vivien has completed a number of sculptures featuring military figures together with a number of other public sculptures including a bronze of Brian Clough