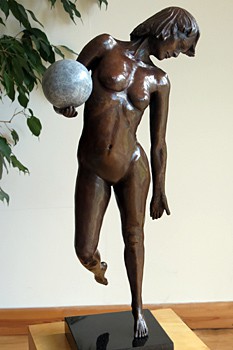 Jeff Childs is an established British sculptor who has been exhibiting his bronze scultpures regularly since 2003. Throughout Jeff's career he has always been involved in the creative arts. This has covered painting and drawing ' the creation of pewter and stained glass wall plaques and jewellery, and the writing and performance of music and poetry.

Latterly Jeff Childs gained a degree in psychology and sociology, together with further counselling qualifications. He worked within counselling and therapeutic settings and part of this involved working with clients using art therapy. His interest in sculpture as a creative outlet then developed through a desire to portray aspects of the human experience in a three dimensional form.

Jeff Childs sculpture influences are unashamedly classical. He has drawn inspiration from some of the great sculptors of the past, such as Michelangelo and Bernini and in the modern period with Rodin. His sculptures focus primarily upon the female form, prefering the everyday reality of the ordinary in his chosen poses. Jeff believes there is essentially no separation of today's model from that of the Renaissance, Baroque and later periods, in that an unbroken line of humanity is captured in the uniqueness, energy and sensuality of the female form. He studies the person from within - in an absorbing and fascinating aproach.

Jeff Childs is a sculptor who works directly from life studies and then detailed photography. His sculptures gradually take form and with it the model's own input continues to fires his ability to create a finished piece that truly reflects the physical and spiritual beauty of the subject. Working alongside his models, Jeff Childs encourages them to bring their unique perspective and creative input to the work. This contributes to the shaping of both the pose and the sculpture's enduring character, so that the model has a much more active role than the popular notion of the passive and detached female presence in the studio. This involvement helps to enchance the natural sensuality of the finished piece.

Jeff Childs handcrafts the various stages in the production of his sculptures. The original sculpture is built upon a handmade metal armature. It is then used to make a mould making before casting and then the sculpture is finally given its patination. Jeff's approach to his sculpture means that every piece acquires its own individual characteristics, becoming a truly unique creation within its own select limited edition.