Portrait in Black and Pearl 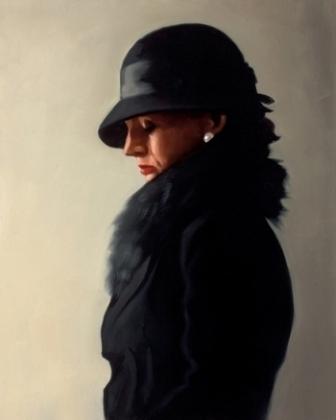 Jack Vettriano was born in Fife, Scotland in 1951. He left school at sixteen to become a mining engineer. Vettriano only took up painting as a hobby in the 1970s, when a girlfriend bought him a set of watercolours for his 21st birthday.

Vettriano's first painting was a copy of Monet's poppy fields ' signed with his birth name Jack Hoggan. His parents are of Italian origin and he later changed his name to Vettriano adding an "a" to his mother's maiden name.

Much of Jack Vettriano's early influence came from studying paintings at the Kirkcaldy Museum and Art Gallery in neighbouring Kirkcaldy. In 1984, Vettriano first submitted his painting to the Shell-sponsored art exhibition in the museum. In 1989, he submitted two paintings to the Royal Scottish Academy's annual exhibition; both were accepted and sold on the first day. The following year, an equally enthusiastic reaction greeted the three paintings, which he entered for the prestigious Royal Academy Summer Exhibition in London and his new life as an artist began from that point on.

Over the last twenty years, interest in Jack Vettriano's paintings and limited edition prints has grown consistently. His original art as well as posters and art prints of his motifs are widely admired and collected. There have been sell-out solo exhibitions in Edinburgh, London, Hong Kong and New York. His original paintings now regularly fetch six figure prices.

2004 was an exceptional year in Jack Vettriano's art career. His best known painting, The Singing Butler was sold at Sotheby's for close to Ł750,000. He was awarded an OBE for Services to the Visual Arts and was the subject of a South Bank Show documentary, entitled 'Jack Vettriano: The People's Painter'.There are many devoted art collectors of Vettriano's work, among them are Jack Nicholson, Sir Alex Ferguson and Robbie Coltrane

Today Jack Vettriano is probably the world's top Limited Edition Print artist .He is one of the most successful artists of the modern era. His art prints of iconic images are found in thousands of public venues and homes across the world. Vettriano paintings and limited edition prints continue to be eagerly sought after. Among the art prints available from Red Rag are three new signed, limited edition prints featuring images from Jack Vettriano's Bluebird series of paintings. These three, large format prints are in editions of 250, each signed and numbered by the artist.

All Jack Vettriano limited edition prints from Red Rag Art Gallery have been reviewed by the artist. This guarantees that all prints offered by Red Rag satisfy the high quality and fine art standards set by Jack Vettriano for prints. Each limited edition print series from the Red Rag British Art Gallery is normally available for immediate delivery and can be shipped worldwide.