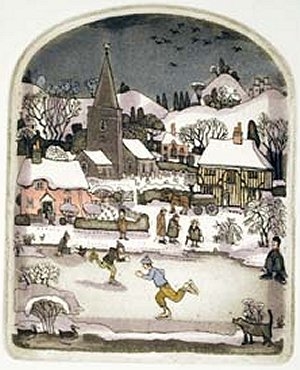 Graham Clarke, author, illustrator and humorist, is one the most popular and best-selling British printmakers. Born in 1941, Graham was educated at Beckenham Art School, where he fell under the spell of Samuel Palmer's romantic and visionary view of the Shoreham countryside.

At the Royal College of Art Graham Clarke specialised in illustration and printmaking, and pursued his interest in calligraphy. With encouragement from Edward Bawden, Clarke began refining an individual aesthetic, printing traditional landscapes marked by a sense of locality and genre. Graham graduated in 1964 and benefited from the print art boom of the decade with commissions from Editions Alecto and London Transport Publicity Department. The publication in 1969 of his first hand-printed "livre d'artiste", Balyn and Balan won recognition from the most influential patron and connoisseur of the day, Kenneth Clark. Lord Clark also wrote enthusiastically in praise of Vision of Wat Tyler: "the whole book is a splendid assertion that craftsmen still exist and cannot be killed by materialism. A few idealists are the only hope for decent values".

Graham Clarke has attracted universal admiration for his revival of beautiful, hand-coloured prints in the tradition of Thomas Rowlandson. The famous 'arched top' etchings, with which Graham Clarke established a widely successful reputation in Britain and overseas, came to public attention in 1973 when the first of these, Dance by the Light of the Moon, was exhibited in London at the Royal Academy of Arts Summer Show, and sold out. Examples of his art works are held by Royal and public collections, including the Victoria and Albert Museum, the British Museum, the Tate Gallery and the National Library of Scotland in the United Kingdom, as well as by Trinity College, Dublin, the Library of Congress in Washington, D.C., the New York Public Library and the Hiroshima Peace Museum. Many more are to be found on the walls of private homes all over the world, collected systematically by devotees, as well as singly by ordinary art lovers who "know what they like". For over thirty five years Clarke has sustained a remarkable evolutionary development of his work, while remaining true to a philosophy of life and to a democratic ideal which he was already formulating as a schoolboy.

At a ceremony in Canterbury Cathedral in July 1993, an Honorary Degree of Master of Arts was conferred upon Graham Clarke by the University of Kent and in August 1993 Graham was made a Chevalier de la Confrerie du Ceps Ardechois in his favourite part of Southern France. Graham was also named as the Fine Art Trade Guild Artist of the Year 1993. For the last twelve years his work has taken him regularly to Japan where he has now become that country's most popular British artist. Kodansha, Japan's largest book publisher, issued "The World of Graham Clarke", an introduction and explanation of eighty Clarke etchings in Japanese, a second edition has now been printed.

Graham Clarke is a man with an overriding sense of tradition, and of religious, social and historical continuities. He takes pride in his view of himself as a local man, a "Man of Kent", with a firm faith in the peace and stability of family, home and community. As such, life and art have always been interdependent, mutually sustaining activities. The scenes in Graham Clarke's prints represent both for him and for his ever widening audience, an idyll and a universal ideal.