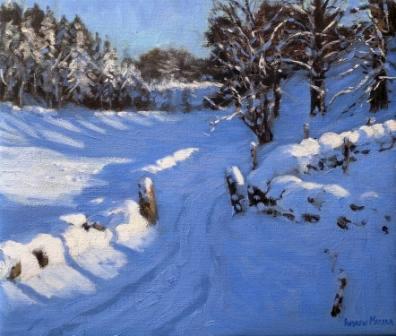 Andrew Macara was born in Derbyshire in 1944. Although Macara studied contemporary modern British Art for a short period with Leonard Fuller at the St Ives School of Painting he considers himself very much a self taught artist.

Today Andrew Macara is one of the most collectible British artists. He has one of the most distinctive styles of present day contemporary British Artists and has enjoyed considerable success with both his original paintings and more recently with limited edition prints.

Andrew Macara travels extensively gathering images for paintings and limited edition prints from around the world. But his native Derbyshire continues to feature in many art works - particularly the much acclaimed Winter scenes. Other subjects with strong demand are Andrew's British seaside paintings.

Andrew Macara is now established as a very collectible contemporary figurative artist. His contemporary paintings and art prints are always in demand and much sought after. And, over the years his paintings have proved to be a good British Art Investment