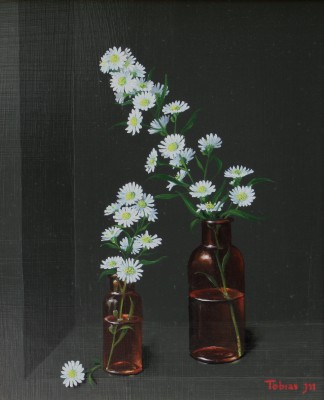 Tobias Harrison was born in 1950. He grew up in the Lake District where his parents were both well known British artists.

As a young artist and whilst at school Tobias Harrison was introduced to the art of pottery. Tobias became inspired to create pottery professionally. After an art foundation at Lancaster University, he graduated at Central College London, and went onto study as a thrower at Chelsea Pottery.

In 2000 Tobias Harrison felt that it was time to seek a new challenge and decided to try painting, having not painted or drawn for 30 years. Harrison loved the medium of oil paint and had found the challenge he had been looking for. Since then Tobias has quickly established himself as a painter and artist of substance developing a strong following of modern British art lovers.

Tobias Harrison makes no conscious attempt to paint in a particular style, letting the subject dictate how he paints. Tobias tries to mimic the colours and textures of what he sees, not a photographic image rather an interpretation of what he sees and feels.