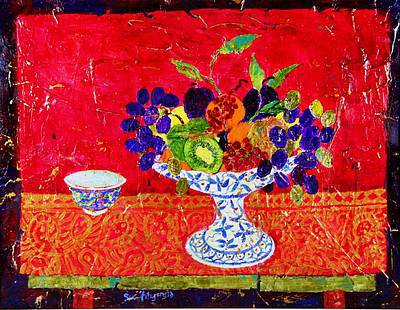 Sue Fitzgerald studied and graduated from York and Sunderland Colleges of Art.She has travelled and worked extensively in the Middle and Far East.

Sue Fitzgerald produces paintings in a variety of mediums, but watercolour is, perhaps, her greatest love since it comes closest to helping her produce consistently individual and original artistic statements. Sue is a quietly assured artist who produces distinctive art pieces typically with dazzling surface and richness of texture.

Sue Fitzgerald paintings are real visual treasures. She produces images which are flattened into bold colour planes verging on abstraction. Shapes and patterns form the basis of tight compositions within which objects are tilted up to very the front of the picture, shifting the perspective and giving the impression of movement and unusual depth. Sue builds up her paintings in five or six layers ofetn using a transparent acrylic and at others more opaque ones.

For Sue Fitzgerald, the work is all about exploration and experimentation. She plays with the notion of form and works back into the surface creating contrasting areas of rough and smooth. Sue deconstructs through detailed observation the flowers and fruits, the pots and vases and represents the physical world in a vivid and fantastical way.

Sue Fitzgerald's paintings are very intimate and quite autobiographical. The porcelain pieces that feature so strongly in her paintings are the result of her travels to the Far East. In terms of style, Sue's work has been compared to that of Mary Fedden. The conscious flattening of forms, the emphasis on strong blocks of colour as a compositional device shows the strong connection between the two artists. Although in terms of texture, the reworking of the surface and the use of gold and silver leaf means that Sue Fitzgerald's paintings reflect the profound influence of artists such as Klimpt and the Nabis School. Matisse in his later life became intrigued with the oriental, and Fitzgerald acknowledges the impact of his work on her individual style.