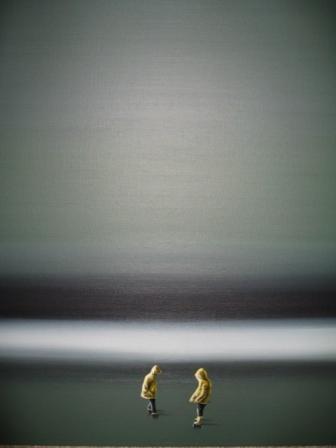 Steve Johnston was born in Glasgow in 1956. He grew up in Dumfries and studied at art school. Steve left art school and for a brief period became an apprentice electrician.

In 1973, Carlisle College offered Johnston a placement. Steve eventually decided to concentrate on photography rather than painting. The discipline format of black and white inspired him. He became an artist excited by the results of a camera rather than painter.

After leaving college Steve Johnston moved to London. He worked on a freelance basis for teen magazines and then for Vogue magazine. The work Johnston produced at Vogue was included in the 'Pink Punk Book' published in 1978.

In 1991, photography no longer became inspirational for Steve. As a result he started painting seriously again. He focused on the medium that he had originally embraced. 'It was then that something clicked and I have not looked back since'¦'¦painting is my life.'ť

Steve Johnston is drawn to figures that visually communicate great shape. Details such as 'how' someone is standing or 'what' they are doing come into play afterwards. It is the graphic shape of the 'body mass' that inspires the Johnston's initial creations. Certain images can unlock powerful emotions which are separate from what the actual content of the picture could create if focused on in more detail.

Steve Johnston creates his figures from photographs. He stresses side or back views and in the process gives freedom to a more anonymous character. For this same reason he prefers minimal backgrounds. Steve uses a mixture of oil and acrylic on the same canvas for his paintings. He experiments with colour to draw as much emotional response from the image as possible. The backgrounds are usually in acrylic, whilst the figures tend to be painted in oil. This is so the oil figure can be worked on in a way that will make it stand out from the background.