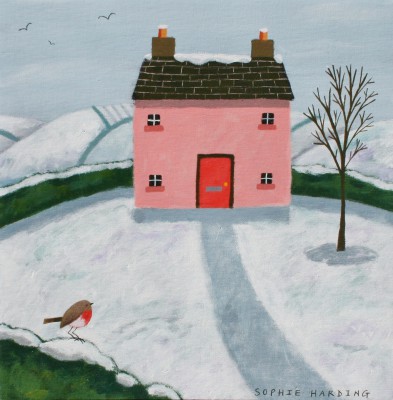 Sophie Harding grew up by the sea in Dorset and was encouraged to draw and paint throughout her childhood by her artistic family.

Sophie Harding's career started early and she has been selling her paintings since the age of sixteen. After graduating from Central St Martin's in 1992 with a BA Hons in Fashion and Textiles Sophie went on to become a freelance illustrator and has had a large variety of modern art work published.

Recently Sophie Harding moved to the South West of England. She had yearned to live by the sea again and now has an attic studio which looks out over the British coastline which is a dream come true for her. Her paintings are inspired by living in Cornwall and observing its landscapes and seascapes. Sophie Harding works from sketches and her imagination, recreating Cornish Style coastal scenes. Influenced by the simplicity and charm of naive art Sophie Harding paintings depict the essential nature of Cornwall particularly during the cooler seasons.