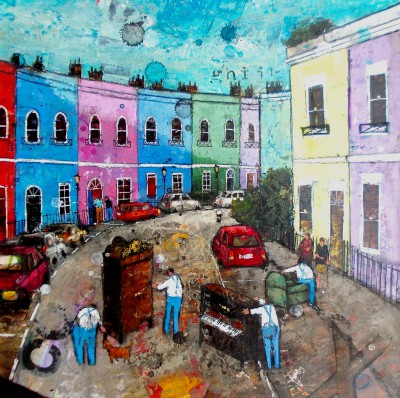 Richard Burel was born in 1974 in Rouen.He is a self taught artist who has developed his own personal style of painting.His art work is humorous with a simple narrative that is characterised and brought to life by his introduction of figures and detail that have amused him or fired his imagination.

Richard Burel is known for his colourful mixed media paintings of townscapes. His busy street scenes with their quirky figures draw us in, to the point where we begin to realise the ordinary can be extraordinary.Full of humor and always with a moment from a story unfolding, Burel's paintings typically tell of a living, breathing city enveloped by urban architecture.

Richard Burel has travelled extensively. His art work is inspired by the architecture from his travels as he sees and the different colours, tones and textures of these structures.Using a technique of layering paint and collage, he incorporates rich jewel like colours creating a real treat for the viewer. Burel works mainly in acrylic, using a palette knife, adding pastels, inks and collage to paintings. The result are paintings with texture and depth which complement the vivid colours that so typify his work.

In addition to Red Rag modern art gallery Richard Burel art work has been exhibited at other leading British Art Galleries. Each painting at Red Rag is sourced from the Richard Burel artist studio and like all Red Rag British art and Contemporary art it can be shipped worldwide.