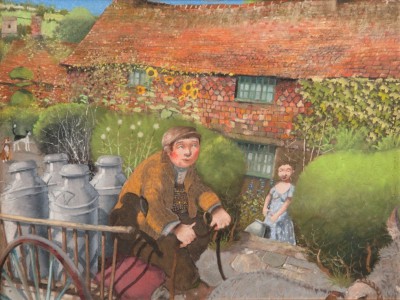 Richard Adams was born in Hampshire in 1960. He was brought up in Wiltshire, and later studied illustration at Leicester Polytechnic. After graduating Richard moved to London and worked as a freelance illustrator for several years on behalf of clients as diverse as the Radio Times, Penguin Books and BP.

During the 1980's Richard Adams won many awards for his illustration art work. However he began to find the scope of work constraining, so decided to retire from illustration to begin exhibiting his distinctive art work in the 1990's.

Adams now lives in the South East of England. His paintings and prints reflect the varied English landscape and seaside and are often populated by quirky characters and animals. Richard's paintings relate back to bygone times successfully capturing the humorous and absurdness of the everyday with a quintessentially English style.