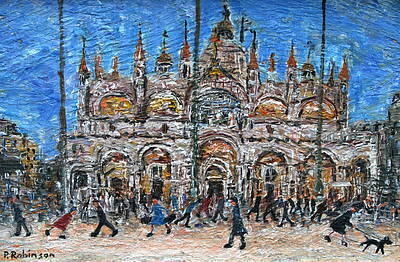 Paul Robinson was born in Penrith, Cumbria in 1959. He grew up in the Cumbrian village of Lazonby, in the heart of the Eden Valley and later studied Fine Art at Carlisle College of Art.

After graduating Paul Robinson moved to London he began a successful career as a freelance illustrator, working for many leading publications such as the Sunday Times, Radio Times and Time Out magazine. He also continued painting in oils and acrylics, developing his strong style, inspired by the streets of London.

After a number of years spent on illustrations Paul Robinson decided to concentrate on full time painting. Working from his eighth floor flat in a tower block in Tottenham, literally overlooking White Hart Lane football ground, Paul pursued the themes of the 'City and its people' , from the anonymous workers and architecture of the Square Mile, to the tourists in Trafalgar Square, working towards his first London art exhibition in the early nineties.

Returning full time to painting, Paul Robinson developed his distinct style. Working in oil, he started producing a heavily textured ''impasto'' approach to his art work. He continued to be inspired by an endless fascination for London subjects and architecture.

In 1999 Paul Robinson left London to live in East Anglia. Paul now regularly commutesť to London to get new reference material. His art work continues to look at the hustle and bustle of the City and the lost figures amongst the City crowds capturing a passing moment in time. The subjects unaware they have just inspired a piece of art. He is also producing new art works inspired by the East Anglian landscape with great expanse of sea and sky. But with not a city worker in sight, Paul has now turned his attention to the character subjects on his door-step to fuel his imagination.

Paul Robinson''s modern art work is included in private, corporate and public collections both in the UK and abroad. In addition to Red Rag British Art Gallery Paul Robinson has exhibited at other British Art Galleries. Each painting at Red Rag is sourced from the Paul Robinson artist studio and like all Red Rag Modern British art and Contemporary art it can be shipped worldwide.