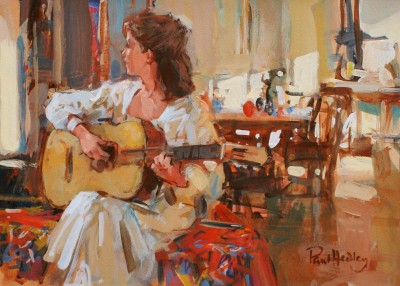 Paul Hedley was born in 1947 spending his childhood in Chatham, Kent. He studied art at Medway College of Art from 1966-68, and then later at Maidstone College of Art where he was awarded the Diploma in Art and Design.

Paul Hedley has been painting ever since he can remember. An education based on traditional art techniques of drawing and painting plus the influence the French artists Edgar Degas and Edouard Vuillard have influenced the development of his art works. Paul paints with compulsion, subtly influenced by his environment and daily experiences.

Hedley is technically gifted as a painter and draughtsman. His paintings and drawings show a fine skill particularly in producing figurative studies of enduring compositions. He successfully captures a fleeting moment of time and the associated feeling. Paul prefers to create his art work in natural light, using sketches and photographs. The process begins with numerous preliminary sketches which eventually leads to the application of tone and colour. His drawings are produced in a 'classical' manner on a toned ground in chalks often combined with watercolour and gouache.

Paul Hedley paintings and drawings are in the art collections of the London Borough of Camden and Queen Mary College. In addition to Red Rag Modern British Art Gallery Paul Hedley art work has been exhibited at other leading British Art Galleries and exhibitions including the Royal Society of British Artists, Royal Institute of Oil Painters and Bath Contemporary Arts Fair. Each painting at Red Rag is sourced from the Paul Hedley artist studio and like all Red Rag British art and Modern art it can be shipped worldwide.