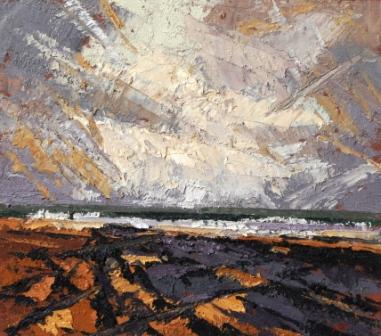 Michael Fairclough, a contemporary British painter and printmaker, was born in 1940 in Blackburn, Lancashire and studied painting at Kingston School of Art. From 1962 to 1964 he taught at the Belfast School of Art. In 1964 he was awarded the Rome Scholar in Engraving and spent the following two years working in Italy. Michael Fairclough also went to Paris to study engraving techniques under S. W. Hayter at Atelier 17. He taught at the West Surrey College of Art and Design from 1967 to 1979.

Throughout his career Michael Fairclough has taught and continued his study of art, engraving and print-making. Over the years Fairclough has received many awards and professional recognition for his work. Michael Fairclough was elected Associate of the Royal Society of Painter-Etchers in 1964 and Fellow in 1973. He is also a Fellow of the Printmakers' Council (1981) and a Member of the New English Art Club (1995). Fairclough was awarded the David Murray award for Landscape and won the Hunting Art Prize for several years in a row.

Michael Fairclough has enjoyed great success at many solo and group shows and his paintings are in collections worldwide. As well as exhibiting at Red Rag Gallery Michael Fairclough's work is widely exhibited both in many British and International galleries. His work can also be found in many London Art Galleries and many public and private collections. These include The Victoria and Albert Museum, the European Parliament, the Ashmolean Museum, Oxford and the London School of Economics, the New York Public Library and the Museum Boymans van Beunegen Rotterdam to name but a few. His work has also been accepted for the Royal Academy Summer Exhibition and the Royal Society of Painter-Etchers and Engravers since the 1960's'.

An interesting recent commission was five paintings for the Meteorological Office in Exeter.

Each painting at Red Rag is sourced from the Michael Fairclough artist studio and like all Red Rag British art and Contemporary art it can be shipped worldwide.