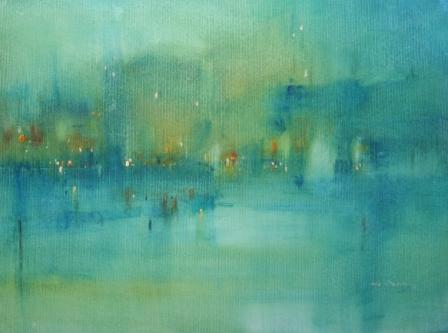 Martin Caulkin was born in Birmingham in 1945. He studied Graphics and illustration in the West Midlands at Birmingham College of Arts and Crafts. Then in the mid- sixties, Caulkin moved to London as a freelance illustrator and art teacher of drawing and painting.

In the late seventies Martin Caulkin contemporary paintings started to be published in print form and distributed successfully worldwide. This allowed him to move from London to rural Worcestershire- a move which prompted a shift away from figurative painting to an intensely personal artistic treatment of landscape. Many of Martin Caulkin paintings feature Herefordshire, Worcestershire and Warwickshire scenes.

The Independent newspaper in a review of the Royal Academy(RA) Summer Show said 'Martin Caulkin is exceptional. He has brilliantly mastered the presentation of incongruous modernity in a timeless landscape.'

Martin Caulkin became a member of the Royal Institute of Oil Painters and the Royal Birmingham Society of Artists in 1983. Since then he has exhibited regularly at the Royal Watercolour Society and the RA Summer Art Shows.

Martin Caulkin contemporary paintings have been selected for various art competitions including the Singer and Friedlander/Sunday Times Competition. They are also in art collections in the USA, Canada, Australia, Holland and the UK.