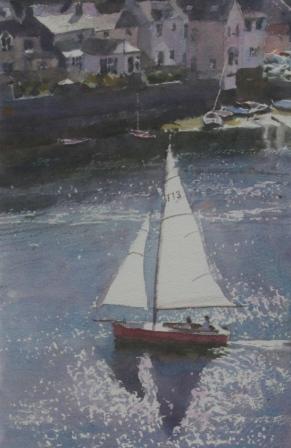 Keith Noble was born in Chorley, Lancashire in 1949. He has painted all his life and studied at Bolton College of Art and Blackpool College of Art from 1967-1971.

After graduation Keith Noble worked for major design and advertising agencies, starting as a visualiser/illustrator and progressing through to Creative Director and co-owner of one of London's top studios.

Keith Noble's subject matter is wide reaching but in every painting his priority is to catch light, shade and atmosphere. The subject matter of Keith paintings is diverse. He is equally talented at producing paintings of architecture, landscape, marine or figures

Keith Noble paintings have been part of The Singer & Friedlander art exhibition and The Tabernacle on several occasions. He was also awarded a High Commendation Award for a watercolour painting by The Museum of Modern Art in Wales. Keith has also exhibited paintings in the RWS Open Exhibition and is a regular exhibitor with The Royal Institute of Painters in Watercolour and the RSMA (Royal Society of Marine Artists)

In 2000 Keith Noble was commissioned to paint a watercolour of one of The Duke of Westminster's properties in London. The painting was reproduced as 60 limited edition prints, each individually signed by Keith and presented by the Duke to selected personnel. Other commissions include the American pharmaceutical giant Warner Lambert (now Pfizer) who commissioned Keith to produce a series of paintings of street and architectural scenes in central Paris. Working on location in Paris Keith Noble painted four large watercolour paintings which now hang in the Pfizer American head offices.

In 2004 Keith won 'The Lincoln Joyce/Donald Blake Award for an Outstanding Watercolour' at the RI Exhibition in London. He also won the St Cuthbert's Mill Award for Best Watercolour in the 2007 RSMA Exhibition which was voted for by the RSMA artist members. In 2007 Noble was elected to full membership of the Royal Society of Marine Artists. Also currently being considered for membership of the RI (Royal Institute of Painters in Watercolour with only 74 members in the UK).

Keith Noble has enjoyed great success at many solo and group British art shows and his paintings are in collections worldwide.