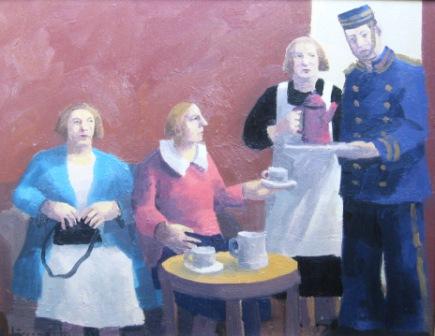 Karolina Larudottir (1944 - 2019). Larusdottir lived and worked in the British Isles from the mid sixties for nearly fifty years before returning to Iceland. Karolina's biography was published in Iceland in 1993.

Karolina Larudottir studied contemporary art at Sir John Cass College, London from 1964 to 1965; the Ruskin School of Art in Oxford between 1965 to 1967; and Barking College of Art from 1977 until 1980. In 1986 she was elected a member of the Royal Society of Painter Printmakers (RE) and the Royal Watercolour Society (RWS) in 1996 and an honorary member of the RE and RWS in 2014.Larusdottir is also an elected member of The New English Art Club.

Karolina Larusdottir's unique vision of both her homeland and England have won her a deservedly high reputation in the fields of contemporary British painting. Many Larusdottir contemporary paintings are rooted in her upbringing in Iceland. Her Grandfather was the owner of the first grand hotel in Reykjavik. Glimpses of this busy environment, scenes of chambermaids, chefs and waitresses in the kitchen are engagingly evident.

She remembers the Iceland of her childhood as a country barely touched by the modern world. 'It was a very austere place, and nobody could do anything without other people knowing. There was no television, so occasions- parties, birthdays, being invited to people’s homes - were very important, and people were very aware of dress, stance and behaviour.' These are themes explored in her art works, but an extra layer of peculiarity is added because the participants are stony-faced. 'It would be awful if they looked too happy' says Larusdottir. 'There’s nothing worse than seeing a picture of a smiling person. I want them to be neither happy nor sad; in that way it doesn’t become sentimental. There's always more going on than you think.'

In some paintings Karolina Larusdottir creates a world of her own, with imaginary people in strange situations, often floating, carrying rainbows or being visited by angels. Often Karolina's contemporary paintings contain a wry humour that enhances the surreal and timeless qualities she creates when dealing with her favourite subject - people.

Karolina Larusdottir paints solid women in colourful dresses. There are also dark-suited men who look like they are acting out frozen dramas with an unearthly calm. Angels appear in the many places and play a large part in the scheme of things. Larusdottir comments: "I love the idea of angels. Someone who sits with you in the kitchen, someone who is around - and an 'angel' - whether you realise it or not. Someone to share your thoughts, something good in your life." Karolina's angels exude an earthy charm. They may have wings and look dependable but they also like chocolate and probably quite capable of a brand of mischief all their own. It is the humans, by contrast in her paintings, who appear other-worldly; lost in private reveries.

Karolina Larusdotir successes include many solo and mixed art shows in the most prestigious exhibitions of modern art in Britain, Europe, Africa and USA. In 1993 and again in 1997 the Royal Academy used her paintings to advertise the Summer exhibition.

Karolina Larusdottir is the recipient of many art prizes. These include a special award at the Premio Biella Internazionale per L'Incisione in Italy in 1990. Larusdottir also achieved further recognition when she was awarded The Graphic artist of the Year 2005, Islensk Grafik.

Karolina Larudottir's' paintings appear in many private and corporate art collections, including The Vatican, Rome and HRH Queen Elizabeth.