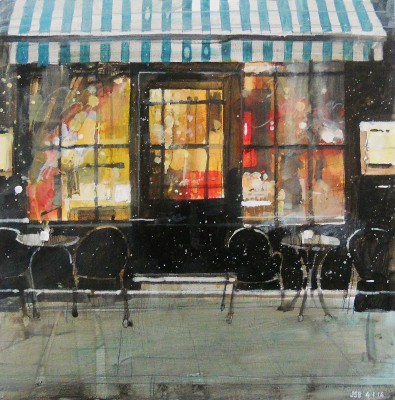 Julian Sutherland-Beatson paints the landscape, coastline and urban areas of our modern world. The main theme of his recent work has been the marking and celebration of the timeless qualities that emerge.

He studied illustration and printmaking at Eastbourne College of Art for 4 years (under the renowned Robert Tavener) before embarking on a career in graphic design and illustration. Since 2004, when he had 2 paintings purchased by the House of Lords to complement an existing collection of period travel paintings, he has been painting and exhibiting in the UK and throughout Europe. In 2008 Julian began a year long project painting Sussex landscapes - Sussex 365 (A year in the life) which culminated in an exhibition in 2010 of 200 of these paintings at Glyndebourne Opera House. He returned as Artist in Residence in 2011 creating work throughout the season (May-August).

In 2012 his focus at Glyndebourne was ‘behind the scenes’ and in 2013 has broadened his subject matter and captured the gardens, architecture and performances at one of the world’s most acclaimed (and beautiful) opera houses.