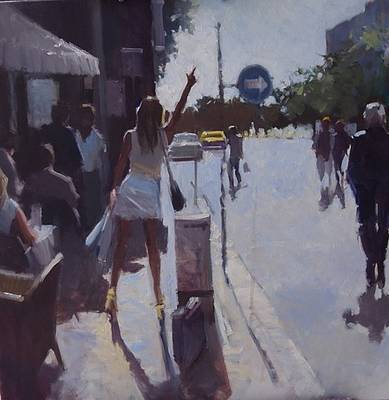 British artist David Farrant was born in London in 1938. He studied art at St. Martin's, London.

Following his training at St. Martin's, London, David Farrant developed an impressive career which has included art exhibitions at the National Portrait Gallery and at the Mall Gallery in London with the Royal Society of Portrait Painters. He established a reputation as one of the finest British painters of portraiture in the country.

Today David Farrant no longer paints portraits preferring to concentrate on his figurative painting. He works in Oil and Acrylic often on a large format so that his paintings have 'presence' in the domestic environment. David tries to hint at a story in the composition of each painting, but it is the impact of light and especially sunlight which is a constant inspiration to him.

Like Hopper or Vettriano, David Farrant's primary inspiration stems from everyday scenes of human interaction. Using these day to day images and outstanding observational skills Farrant creates wonderful paintings with muted colours and complex shadows. His preferred medium is either acrylics or oils, and his large-scale compositions have a huge impact whether displayed in a corporate or a domestic environment.

Talking about his art works David Farrant says: 'I like to think my paintings work on two levels - firstly, and in a formal sense, as compositions in which strong tonal contrast, accents of colour and simplification of form are key elements. Secondly, and in a narrative sense, I hope they carry a mood and the possibility of an unfinished story which the viewer can share".

In addition to Red Rag Gallery David Farrant's art work has be shown at a number of other leading British Modern Art Galleries including the Royal Academy. Farrant's art works feature in many private art collections throughout the UK, Germany, New Zealand, Australia and the USA.

For more information or to buy British modern art from David Farrant :