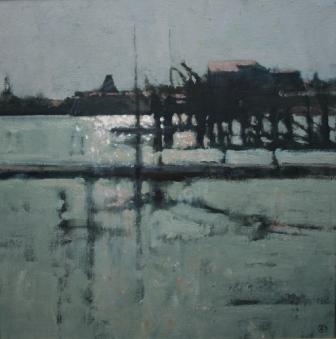 Colin Orchard was born in Ewell, Surrey in 1935. He had no formal art training and his first job was as a messenger in the art department of The Times. He progressed through the art department eventually becoming lead graphic designer.

Since 1983 Colin Orchard has been painting full time. During this time Colin has exhibited extensively at more than 50 art venues throughout the UK. His paintings have regularly featured at the Royal Academy Summer shows. In 2007 he was appointed a member of the Royal Society of British Artists.

Like artists Sickert and Vuillard who have influenced his art, Colin Orchard is an impressionist painter. His paintings often display the shades and shadows of Winter. They are often deliberatively inaccurate because of Colin's frequent inclination to decrease or increase elements within a composition.

Colin makes regular visits to places that provide many of his painting subjects. Typically these include Venice, East Anglia and Cornwall.

All Colin Orchard's paintings are oil on calico, mounted on board. He prepares his own panels, using traditional methods for glueing and priming the panels and gessoing the frames.

Colin Orchard is included in the 'Dictionary of British Artists since 1945' by David Buckman. He also appears in Marion Whybrow's book 'St Ives 1983 ' 1993; Portrait of an Art Colony'. He won 'The Artist' award at the 2007 RBA exhibition