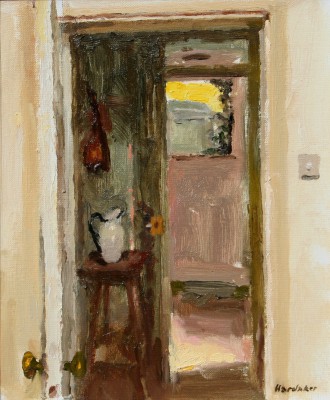 Charles Hardaker is an artist of International standing. He trained in the West Midlands at Birmingham College of Art and Crafts and the Royal College of Art.

Charles Hardaker contemporary paintings are in many important art collections. These include: the permanent collections of The Tate Art Gallery; the Guildhall of London, the GLC; the Institute of Civil Engineers; The National Library of Wales; and numerous private British art collections and overseas including USA, Canada, Japan and Greece.

Charles Hardaker contemporary paintings typically feature landscapes, still life, portraits and philosophical/ scriptural subjects. More recently Hardaker has been fascinated by the effect of light, shade and colour in a series of internal architectural paintings of his beloved art studio.

Major art commissions underatken by Charles Hardaker include paintings of: the BP Oil Terminal Sullom Voe; the Kielder Reservoir for Northumbria Water; murals for the Howard Hotel, London; the building of the Channel Tunnel for Eurotunnel; two cycles of paintings based on Seven Days of Genesis (7 works) and The Gospel of Thomas (11 works) for Townley Hall, Ireland; also numerous portraits. He has also been engaged in painting murals, at a country house Oxfordshire.

Charles Hardaker has had several solo art exhibitions to date in the USA and at British Art galleries and has been the recipient of many art awards. This includes winning the coveted di Laszlo art medal in 2005 at the Royal Society of British Artists. Hardaker has also been a finalist three times in the prestigious Hunting British Art prizes.