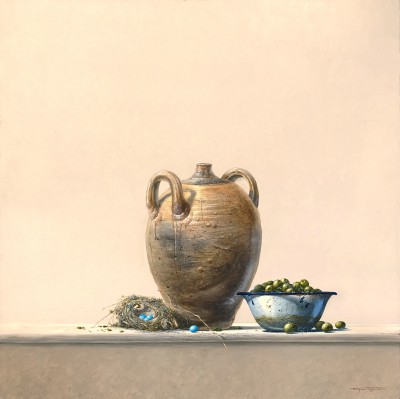 Bryan Hanlon was born in Southampton in 1956. From a young age he developed an eye for the natural world. His regular visits to the Itchen Valley between Mansbridge and Bishopstoke were a source of continuous inspiration.

He lives in Wiltshire surrounded by the environment which has inspired his paintings.He is a self-taught painter working in a wide range of mediums.Today Bryan is widely regarded as one of the UK's leading artists. He uses various subject matter and medium, paintings in egg tempera through to oils.

Bryan Hanlon is well-known as a wildlife artist, most specifically birds, but he also paints landscapes, portraits, and sporting subjects. He has exhibited widely, both nationally and internationally with one man and mixed exhibitions, including the prestigious ‘Birds in Art’ exhibition in Winsconsin, America, the International Animal Art Fair, France, The Rainforest Exhibition, Barbican, London and the Whaletail Exhibition, Nairobi, Kenya.

Bryan was commissioned by Jersey Zoo to paint a picture to commemorate their 25th Anniversary, featuring Gerald Durrell along with 25 endangered species. Artistic journeys have taken him throughout Europe and America and into Africa, which was the inspiration for his magnificent book ‘Birds and Beasts Africa’ published by Swann Hill Press.He has also undertaken many commissions including illustrating books and has written and illustrated African Wildlife.

In addition to Red Rag Art Gallery Bryan Hanlon art work has been exhibited at other leading British Art Galleries. Each painting at Red Rag is sourced from the Bryan Hanlon artist studio and like all Red Rag British art it can be shipped worldwide.