Summer Haze on the Ionian Sea 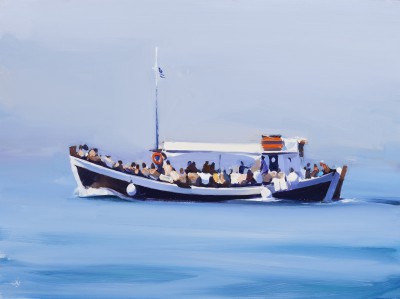 Alan Kingsbury was born in London in 1960. He showed an early interest in painting and from the age of nine was producing contemporary works in oils.

At University Alan Kingsbury studied psychology and art history but questioned the relevance of art school to him and so he undertook another year of full time study of art history, specialising in the paintings of old master and modern European works.

In 1983 Alan Kingsbury accepted a student internship at the Peggy Guggenheim Collection which enabled him to paint and study the art and architecture in Venice. Following this Alan worked as a cataloger of modern paintings for Bonhams fine art . During this time Kingsbury viewed hundreds of paintings each week in art galleries and auction houses and was able to gain a real understanding for detail and effect in painting.

In 1986 Alan Kingsbury further progressed his career as an artist by moving to Venice. Here Alan worked outdoors painting oil sketches of the architecture in varying light conditions. Later Kingsbury moved to Scotland where he spent five years developing his contemporary painting style and technique. It was here that he began to compose his characteristic imaginative figure subjects.