The Cook Steps Out 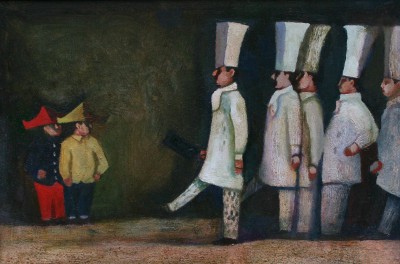 William Balthazar Rose was born in Cambridge in 1961. He lived in Italy as a child and grew up in California. He studied at Berkeley and Princeton universities, and received a Masters of Architecture from Princeton. Upon graduation Rose worked as an architect in New York and California. In recent years he has spent much time perfecting his painting in Umbria and Tuscany. Italian art and culture fascinated him so much that he decided to settle in Il Nostro Paese, in Sansepolcro.

William Balthazar Rose love for art originated in childhood. He was born to a family of artists and since a very early age has been immersed in the Arts. As a child Rose studied everything from jewellery, costume and architecture to bronze casting, stained glass and poetry, but above all else painting. Influenced by the air of interest for divergent artistic expression he breathed in his family, he began to draw and paint.

William Balthazar Rose has thought profoundly about art, society and existence. He has also developed an interest in sustainability and green architecture. His service with not-for-profit organisations seeks to contribute to discussions on the environment, architecture, sustainability and imaginative problem solving of world issues. However he remains in principal an artist, seeking answers to life’s mysteries upon the canvas. His painterly preoccupations have to do with the poetic and he aims to truly suspend time through the medium of painting.

Painting has been William's principle preoccupation in recent years. His work, which frequently explores culinary themes is highly distinctive and much sought after. Talking about his work he says: 'I have searched to elaborate a personal sensibility and to inaugurate a type of painting perfect in execution and one capable of the suspension of time. One of my greatest interests has been the creation of a personal narrative. This has lead to the development of a series of paintings known broadly as cooks. These paintings are humorous and at times terrifying. They represent a delving into the subconscious and mysterious portions of the collective and personal psyche.'

In addition to Red Rag British Art Gallery William Balthazar Rose art work has been exhibited at other leading British Art Galleries.His art works have also featured in numerous shows in Italy and the United States. Each painting at Red Rag is sourced from the William Balthazar Rose artist studio and like all Red Rag British art and Contemporary art it can be shipped worldwide.