Resting in the Sun 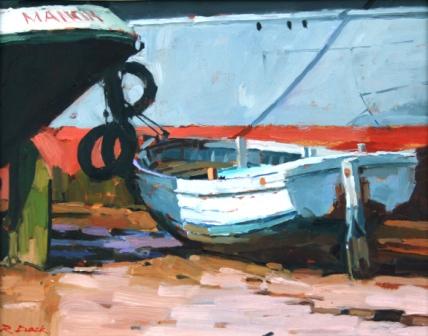 Richard Dack was born on the East Coast, and Dack's familiarity with the maritime environment has provided a recurrent theme in his contemporary paintings.Dack's paintings are mostly oils on canvas although his move to Devon and subsequent discovery of Dartmoor led to a large body of work on paper.

Richard Dack left teaching art in 1997. Dack's paintings have won many British art awards including: the Mariners Award for Modern Art and The Worshipful Company of Shipwrights Art Award at the Royal Society of Marine Artists exhibition in 1998 and again in 2005. Richard Dack also won the 1999 Ariel Open Modern Art painting competition in Totnes.

Pursuing maritime subjects takes Richard Dack to many British coastal locations, but it is invariably the quality of light that provides the major focus in his contemporary paintings.

Dack is a member of the Royal West of England Art Academy in Bristol, Avon and Royal Society of Marine Artists