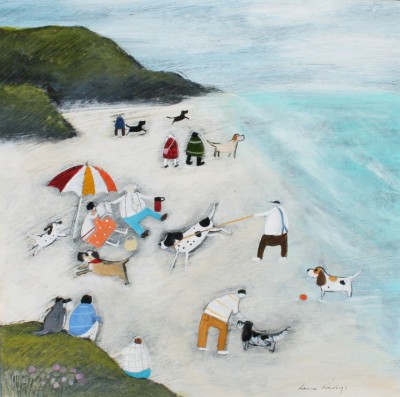 Louise Rawlings was born in 1969. She studied at De Montfort University, in Leicester, graduating with a first degree in Surface Decoration, having specialised in illustration.

Whilst at University Louise was recommended by one of her tutors to a publisher and rapidly became involved in long term projects, one of them being with Greenpeace. This was the start of a long and varied career for Rawlings as an illustrator. She has worked in areas which includes giftware, ceramics and book illustration. Although these days, Louise still works for a selected group of publishers both in England and in the USA her primary focus is on producing fine art.

The inspiration for Louise Rawlings popular park life paintings comes from observations on her daily morning walk with Alfie, her English Setter. She enjoys observing and capturing the characters she watches and meets every day in walks across the park.

Louise produces paintings in watercolour, but her real love is working in a much more 'naive' mixed media style, acrylic being her favourite medium. Speaking about her art work she says: 'I can be inspired by anything from a small magazine cutting to a walk in the park with my beautiful English setter. One of my favourite subjects to paint is our lovely British coastline, Wales being a particular favourite.'