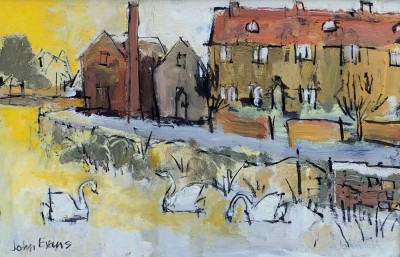 John Evans was born in Coventry in 1948. He started to paint in 1981 under the tuition of Peter Coate, RWA, and soon became interested and influenced by the St Ives artists, often painting in a similar two dimensional style.

John found that he could not always capture everything that he saw in a traditional format. As a result he began to explore different art styles and became fascinated by medieval painters. They didn’t understand perspective, and wanted to depict an event in history, capturing as much information as possible, in a single painting.

Using this technique meant that figures, buildings, landscape etc., were out of proportion to each other, but the whole event was captured in a single picture. In painting a subject, Evans wanted to show what he felt was important and interesting regardless of traditional perspective. He then chose to work with what could be termed as ‘two horizons’. This allowed him to show a front elevation plan view, and alternative views, in the same painting, He also changes the proportions so that everything considered relevant; fits into the picture, regardless of perspective.

Although a lot of John's paintings are landscapes and seascapes, he also enjoys creating interiors and cityscapes, with objects placed to enable the viewer to see all the information he is trying to convey. He usually works from quick sketches, trying to capture the immediacy of the drawing in the final painting. Evans uses acrylic, as it dries quickly, and also charcoal, which is applied to the wet paint, to indicate a strong line or accent.

In addition to Red Rag Gallery John Evans has exhibited at other leading art galleries including the Royal West of England Academy (RWA). His art work is in many collections, including the Permanent Collection, Palace of Westminster. Each painting at Red Rag is sourced from the John Evans artist studio and like all art work from Red Rag can be shipped worldwide.