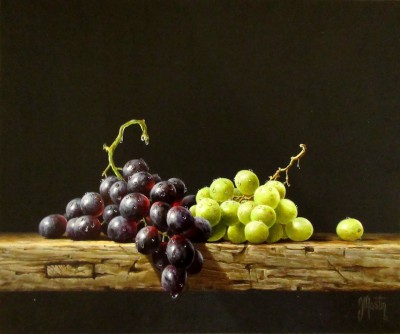 Ian Mastin was born in Leicestershire in 1949. Shortly afterwards he and his family moved to Queensland, Australia.

During Ian's schooldays he had no involvement with art. It was only in the mid 1980s that he began to sketch for recreation. His natural gift for art and a strong observational sense for detail, soon resulted in an invitation to exhibit his work in a Brisbane gallery where he first experienced success.

In 1991 Ian Mastin returned with his Scottish-born wife and their children to the British Isles where they settled in East Lothian. It was here that Ian picked up a paintbrush for the first time and after a year of experimentation in fundamental techniques, he committed himself to painting full-time. As a novice painter, Ian's early paintings were mainly watercolour and the subject matter varied. However, a discovery of still life in the traditional style gave him a strong direction and the passion to pursue his artistic goal of excellence in this genre.

Ian studied the techniques and compositions of the old masters paintings and honing his skills through disciplined study and practice.Today he is recognised as an exceptional artist, working in the tradition of the Dutch and Flemish Masters of the 17th century. Mastin gains inspiration from many sources without being beholden to any particular style but the influence of the Dutch and Flemish Masters is inevitably present in his art works creating a timeless quality.

Talking about his work Ian says: “I recognise the influence of the Dutch and Flemish Masters of the 17th Century in my work. However, I wholeheartedly embrace the fascination and challenge of the still life whilst in no way feeling bound by tradition or convention. My passion is to bring to life the beauty in the simplicity of everyday objects, especially the utilitarian hand-crafted skills of anonymous artisans of the past”.

Ian has now returned to Australia and his work has also been exhibited in New York, Amsterdam, Hong Kong and Singapore and can be found in private collections around the world. In addition to Red Rag British Art Gallery Ian Mastin has exhibited at other leading British Art Galleries. Each painting at Red Rag is sourced from the Ian Mastin artist studio and like all Red Rag British art and contemporary art it can be shipped worldwide.