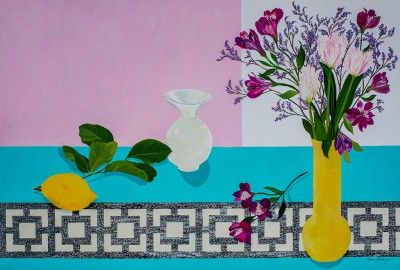 Anne Goldberg graduated with a BA Honours in Printed Textiles from Manchester Polytechnic in 1982, shortly afterwards winning a design stand at Olympia, which set her on the road as a freelance artist and designer. It was during this time that Anne won the London Evening Standard Award for one of her paintings that led to a partnership with the London Design Centre, where her work was featured in The Haymarket and across the country.

Following this, Anne Goldberg went on to work for the British manufacturer of fabrics and wallpaper, Arthur Sanderson & Sons Ltd, as a designer in their in-house studio in Uxbridge, London. After moving to Manchester in the late 1980s, Anne lectured in Art, Design and Interior Decorative Techniques in various colleges in the North West.

Anne now dedicates her time to creating commissions and gallery exhibits, exploring her fascination with colour in both her intricate still life work and abstract compositions. What unifies her work is a vision of colour and texture with a strong sense of pattern, which is always considered and at the forefront of her mind when painting or designing, whatever the subject.

As well as exhibiting at Red Rag Gallery, Anne Goldberg has shown her work in several London galleries including Liberty's, The Royal Academy of Art and The Mall Galleries.