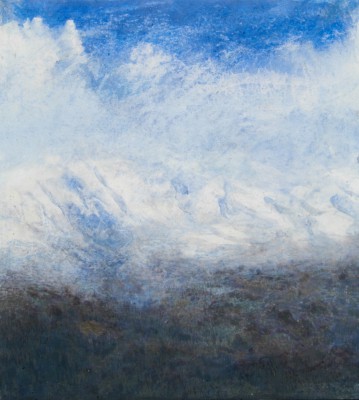 Since then Andrew has deservedly achieved a reputation for producing fine landscape paintings. His paintings are undertaken using the traditional medium of egg tempera. The medium allows Andrew to progressively apply small amounts of pigment thereby building layers of fine brush strokes over the traditional gesso ground. Since the time of the renaissance artists who used egg tempera the results of his work produce paintings of rare luminosity.

Andrew George typically paints the British landscapes around his home in Somerset; the Dorset's Coastline and the majestic hills of Scotland.

Talking about his work Andrew says: Andrew says: "Quite often I use a number of different viewpoints in a painting. I like to lift the viewer so that they are hovering above the ground ready to float into the landscape. Paintings start with broad washes that are gradually refined with smaller and smaller marks."

A number of Scottish painters have had a strong influence on his paintings. In addition he has also been particularly influenced by two American painters - Andrew Wyeth and Edward Hopper, but the style of his paintings is very his own. He successfully captures the landscape creating both atmosphere and the sense of time and place.